Day 15: The Best Thing to Happen In The Past Year 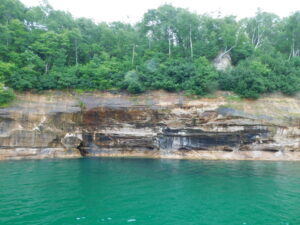 Vacation. It was one of those vacations when I needed to get away from the house, from work, from everyone around the people and me I talk to every day. Sometimes it’s good to get away. It was only for a week, and it was, as my husband usually does, an activity-packed week. He loves to travel, you see, and he wants to see and do it all. I could take it or leave it. I’m just as happy taking a week of vacation where I stay at home in the comfort of my own bed for a week. It doesn’t matter much to me. Maybe it’s because my family rarely took a real vacation. Only once in my memory did go somewhere and that one trip was so fraught with disasters that it doesn’t exactly stand out as a “grand old time” to my recollection.

In any event, our one week of vacation was the Upper Peninsula of Michigan. I drove, the whole way. It’s about seven or eight hours of non-stop driving for us, the first half of which is pretty dry and dull. Of course, the beautiful drive into Duluth is always exciting. When you come over the ridge on 35W and see the land basin of the St. Louis River as it reaches its fingers out into the icy blue water of Lake Superior with the crowning jewel of the Lift Bridge in Canal Park, it is a sight to behold. But, since my husband is from Duluth, we’ve seen it to death. If you’ve never been there, and you’re from the midwest, do yourself

a favor and see it once before you die. It’s just so breathtakingly beautiful; few places in America quite compare.

After my favorite lunch in Duluth, we drove through Wisconsin. Well, as a Minnesotan you can’t honestly expect me to say something nice about Wisconsin, can you? I mean, they like the Packers, so they’re obviously a little “off”. Once you cross the border into Michigan, it doesn’t take long to see the magic of the place. Around every corner, every spot, there is one after another jaw-dropping view. It’s a festival for photographers and nature lovers alike. We were smart and played a road game along the way to break up some of the monotony of driving. We took a few days and drove Michigan’s version of Lake Superior’s shores, marveling at every sight, some of which are just astounding. The view as you stand at the northern-most spot on Highway 41 by Copper Harbor is something I’ll never forget. Then there are the lighthouses, standing like a good watchdog against the bright blue crystal skies with the crispness of the air around them.

The most memorable of our time in the UP was on a boat out on the lake. We went on a cruise out of Munising to the Pictured Rocks, which is a national landmark and is part of a National Park that is partially on land and partially on water. The best way to see these natural wonders, which are cliffs hanging over the water’s edge is from a boat. Mother Nature, in all her glory, has created “pictures” on the cliffs that come from the minerals in the land. As the water spills into the lake, it seeps through the rocks and the minerals within to create various and imaginative “pictures” variations on the rock of absolutely incredible colors and variety. The Native Americans at one point named them the Pictured Rocks and the name stuck for posterity. The views from the boat are well worth the price of the tour. For our ride, however, we could see that it was just about to rain, however, being hearty Minnesotans we decided to “tough it out”. There was a family of teenagers from Ohio in the seats in front of us and we quickly befriended them and decided to challenge them to see who could withstand the weather the longest.

The rain was gentle and teasing, at first, and then it rained a little harder. The teens, at least, had the foresight to wear rain gear, which we did not, so they pulled up their hoods about them and huddled together for heat. The wind picked up, and the rest of the passengers departed the open-air top section for the safety of the covered area below. We all remained, along with the teens’ aunt who was their resident “expert” for the tour. There was lots of smiling and laughing as it grew windier and rained harder. Then the heavens emptied, and I mean, it just poured. There wasn’t an inch that was wet on any of us, and the teens gave up their spots and conceded defeat, at which point my husband acquiesced as well. We went below to find only one seat, which the teens were kind enough to give to me. The rest of the passengers laughed and smiled at us and shook their heads in amazement of our stupidity, but we just laughed at the fun of it all. None of us died from getting wet, and it was a moment to remember. It was the highlight of our trip, and we laughed about it for the rest of the day, every time we realized our clothes or hair were still somewhat damp. For some reason, it took a long, long time to dry out.

So, it wasn’t the best, most beautiful, or most comfortable thing we did on our vacation, but getting sopping wet on a boat tour, was, indeed, the best thing to happen in the past year. It brought my husband and me closer together and made us do something we hadn’t done in a long time: Just plain have fun and laugh. If those kids ever read this, I’d like to thank them and their aunt from Escanaba. You made our day!